THE 23rd EXHIBITION of CONTEMPORARY ARTISTS
A DEFRAGMENTED TEXT

Waking up to a televisual dark day with dozens of different bad news. Facing cruelties, accusations, lack of awareness and hypocrisy. Trying to take position without falling into the traps of dogmatic representation patterns and ideological lies. In this very picture, the question should not be how to survive, but how to find ways to trigger small uncontrollable bugs in the system. Dealing with contemporary art can be a bug on its own.

As a piece of evidence, contemporary art today has the potential to be one of the important channels for global interaction of economy and information. Thereby, networking through this channel is important to reconsider and to accentuate the role of the artist as part of this local-global communication. In the meantime, a part of the world is engaged in the information revolution while the rest of the world is kept within the old and familiar geographic or national or ethnical splits. These gaps are not only reshaping the international geography, but also in many cases operate within nations making new social orders and political alliances. In front of these processes, art and artists are being rephrased as well. The motivation and perception of art along with the means of processing and presentation techniques are in a constant flux in the course of emerging technologies, new economic and political orders, geo-political movements, changes and cultural input.

selection of the artists

As one of the parts of this new order, artists should consider inquiries about communication, globalization, and interaction as their new territories of research. Herewith, in this exhibition we selected artists prior to works. We examined all the portfolios and proposals along with the submitted works and tried to catch reflections of these processes. In the meantime, we especially focused on the artists who understand the medium/media that they express themselves through with spatial awareness. At the end, we even preferred to show more than one work from some of the selected artists. Yet, they all have innovative and alternative methodologies, attitudes and approaches.

To curate an exhibition that is valid in its own right without being a collection of selected works submitted to a competition was the biggest challenge we anticipated before our selection process began. Being able to balance between the works in order to build a structure for the exhibition seemed to be the most difficult task. However, during the selection process, the works by the selected artists automatically started to communicate with each other. Without an exception, all of the works have the potential to articulate their significance and position in relation to the shifting balances and changes in the world and the current contemporary art practices.

design of the exhibition

Rather than imposing our views to the exhibition or giving thematic guidelines, we wanted to display various methodologies, attitudes and approaches through a structure of networking. Yet, this quality of the exhibition had to be supported by democratic methodology through which works would not overshadow each other. Accordingly, we intended to build a structure of networking which allows the audience to experience the works through a static yet sociable interface. Through this interface the spectator will be able to choose his/her own path in the exhibition by creating new links and exchanges. So, breaking the familiar/linear track of walking around the walls of the gallery serves as a suggestion for a different experience not dictated by the architecture of the gallery, but by the works themselves. At the same time, this curatorial decision can be read as a criticism towards the architectural structure of Aksanat as a space for contemporary art.

While the structure of the exhibition imitates networking principles, the selected works have mechanically synchronized through broad thematic formations orbiting around urban culture, motion and story-telling. The ground floor is filled with motion based urban contingent works, whereas the first floor is dedicated to narrative works, and in between site-specific works function as connection between these two floors.

small notes on the selected artists and the works

Batur Sönmez is a sound artist. His style varies between industrial and noise-based experimental sounds to improvisation with elements that stem from communication technologies. In his performances he criticizes “media based realities” through repetitive patterns. He collaborates with various young artists and groups such as Unit, Analog Suicide, Dadaloop, Radiophonik, Audio, Werk, Dead Frequencies, Subjekt, AVST, B/S and Teletrans in order to widen and liven up “sound-art” in Turkey. His contribution is a performance on the opening night and documentation of this performance will be displayed on the info wall during the exhibition.

Since the beginning of their art venture, through different paths, both Zeren Göktan and Serap Doğan have been obsessively working on specific conceptually and aesthetically shaped issues. The more they investigate these issues, the more they achieve progression without repeating themselves.

Zeren Göktan’s installation resonates between life and death. It conceals harsh critiques for the current situation of the world and the positioning of the individual. Her work in the exhibition amplifies its trembling mental effect with powerful sound.

Serap Doğan‘s work pushes the viewer into an unstable state of questioning. The familiar landscapes of the city are transformed in-motion into organic mirrored images that pulse in the gap between a superfluous aesthetic and an industrial nightmare.

Prior to her submitted works, Lebriz Rona‘s methodological approach, which was revealed through her research, had impressed the jury. Each time, she intrudes her working space with subtle spatial interventions to the architecture. While examining the architectural elements of a space, she also questions the perceptive behaviour codes of the viewer/habitant of the space.

Özlem Sulak contributes to the exhibition with 3 works which, each in its own way, reflect a more than ever relevant tension between the alienated urban experience and the wondering and struggling inhabitant. While performing private and enigmatic rituals, the visual language of the works also adopt a distanced point of view and eventually this tension is translated into a delicate and private statement.

Evrensel Belgin‘s work, “anti-pop.com” is an outstanding example for the new form of activist art of the digital age. By the use of a well-organized navigation system, he combines severe critique with parodies through a distinctive graphical language. By this way, he emphasizes the most important outcome of the new-media art as “the new relationship among the work, the artist and the viewer”. Along with the strong content of his work he makes the viewer/user navigate other people’s projects through his selected links.

Pınar Yoldaş challenges the perception patterns of technology, interactivity and digital art. She uses the very common formula of child art education kit by proposing games on still-life images and trendy consumer fetishist products. Through these simple games, the perception of “modern art” versus “contemporary art”, history of art, education of art and the high expectations that new technologies raise are questioned.

İlke İlter likes very much to paint little creatures to create a big, wide world. Her canvases are not overloaded. The appearing elements are on friendly terms with each other. The conscious blending of dimensions together with matching colours particularly enriches the aesthetical quality of the paintings.

Bengisu Bayrak‘s video installation “Fast-İman” questions the relevance of religious messages for contemporary life. In another level, it also documents the consequences of neo-liberal economy to our way of living. The video shows a situation in the townscape of Istanbul: Above the entry of a mosque, letters from the Quaran run on a digital display screen. Bayrak choses an alternative way to give info about the work; instead of using a text, she uses a documentary video, displayed via a small monitor, about the observable fact that the work is based on: Imagination and perception differ.

Ahmet Albayrak works with words. He prints these words in style of first grade elementary school reading cards on ordinary paper strips and spikes on pins. From this basic element he develops spatial formations, streams and sometimes fields of text. These words also function as keywords to criticize local and global socio-political situations.

Sali Saliji has shot the beautiful boring video “Retropassive” which has a unique cinematographic language in three chapters. These three chapters develop in the course of a nearly not existing plot organization in a very absurd way. As a viewer, one doesn’t dare look away from the video simply because the essential can be missed at any time.

Berna İpek shows a series of paintings with “exposed” heads on black ground. The faces are distorted into weird grimaces, which supposedly cannot be generated without divers appliances, unless they exist only in the imagination of the artist. Each of them might have been extracted from various different situations that only the spectators completed with their own imagination. The dolorous, shocking poses attract our attention from the first instant.

Fatma Çiftçi positions a police officer into the landscape. Not to an arbitrary, mundane place but onto a landmark. The eye of the law apparently guards over the country, although the pose on the prominent rock resembles more like a tourist rather than a respectable law enforcement officer. As it is also implied with the framing of the photograph, the work directly questions the concepts of “authority”, “power” and “status quo” through parody.

Berat Işık combines black humour with the tragedies of miscommunication and discommunication within the situations of geo-political, cultural and social suppression. Through the titles of the work along with the political, historical, cultural and ideological references in the videos, he underlines the tensions and gaps between hierarchical powers. Both “Eyes Wide Shut” and “Dancer in the Dark” invite the viewer to experience a kind of physical blindness and at the same time a state of mental awareness, whereas, “Psycho” is a shivering satire for the current global and local socio-political situations.

Ali Ekber Kumtepe‘s video, “Kaçırmaca” is a witty model for how low-tech producing methods can be a valid alternative for creating new media art. The simplicity of the piece provides accuracy to make a cynical yet amused remark about the contemporary high-speed life that we are part of.

Ceren Oykut has a very unique style with her drawings, which are based on daily life experiences in the city – mostly “Istanbul” – as the setting of her works. Her drawings create plastic realities through mundane details of life in the company of visual rhetoric. These drawings also take part in multidisciplinary projects concentrating on Istanbul’s sounds and cult.

Simge Göksoy displays multiple new-media works in a portfolio format with a plot organization. An interactive story works as a computer game and navigates the viewer/user through animations, artworks, text, and video-works.

Banu Taylan‘s work creates its own space both physically and thematically. It is a fairy tale with a sci-fi touch that fills a room. Texts on walls accompany wall paintings on 4 walls and envelope the viewer along with the surrounding sound. She has a unique drawing style, which resembles comics, and the narration adds more humorous and surreal elements to the work. She has worked with Can Türkinan for the sound design of the work.

Can Türkinan is also responsible for the entire sound design of the exhibition. His work is to create sound corridors to make a composition for the exhibition by using the actual sound of the works. 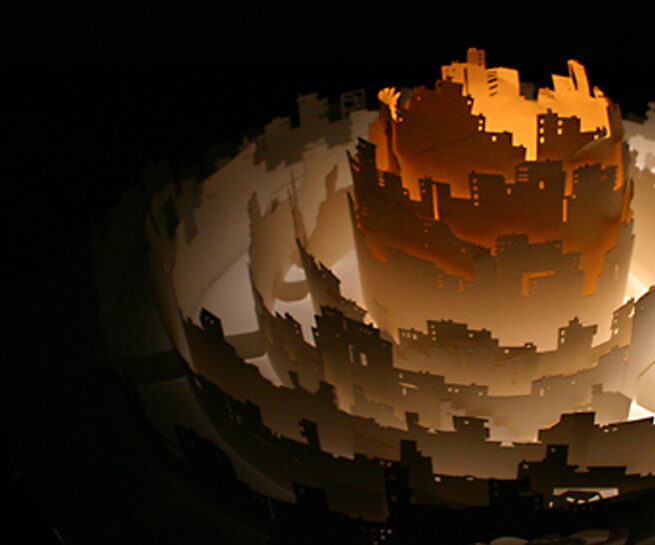